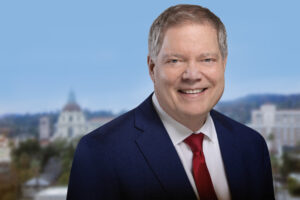 Tom Bunn, partner at Pasadena law firm, Lagerlof, LLP, recently scored a significant victory in the California court of appeal in a 21-year legal battle when the court held that a municipal water supplier could not tap into an over pumped groundwater basin and acquire protectable water rights in that basin.

Bunn represented the Palmdale Water District, which has supplied its customers with water from the Antelope Valley groundwater basin since the 1920’s. In 1999, a group of farmers sued the district and other water suppliers to determine the water rights in the basin. After sixteen years of contentious litigation, Bunn helped craft a settlement that allocated the water rights in the basin and reduced all parties’ pumping to a sustainable amount. Almost all the farmers and public water suppliers accepted the settlement, which today forms the basis for managing water supplies in the basin.

“The court of appeal correctly balanced the water rights of long-time users with the protection of the groundwater basin for future users,” said Bunn.

Mr. Bunn has substantial experience in complex negotiations in multiple issues, however he specializes particularly in water and water rights. In those negotiations, he has developed a reputation for good judgment and integrity. He has taken part in the negotiation and implementation of groundwater management plans and represents water producers in litigation.

Have Questions? We Can Help!

Lagerlof, LLP is the largest firm in Pasadena. With 113 years of experience satisfying clients, we are leading the market in strategic support. We are a team of trusted legal advisors on a mission to provide every client with clarity and understanding to succeed in a complex world. Lagerlof, LLP stands for innovation tempered with practicality, for thoroughness countered with common sense, and above all else, for impeccable integrity.