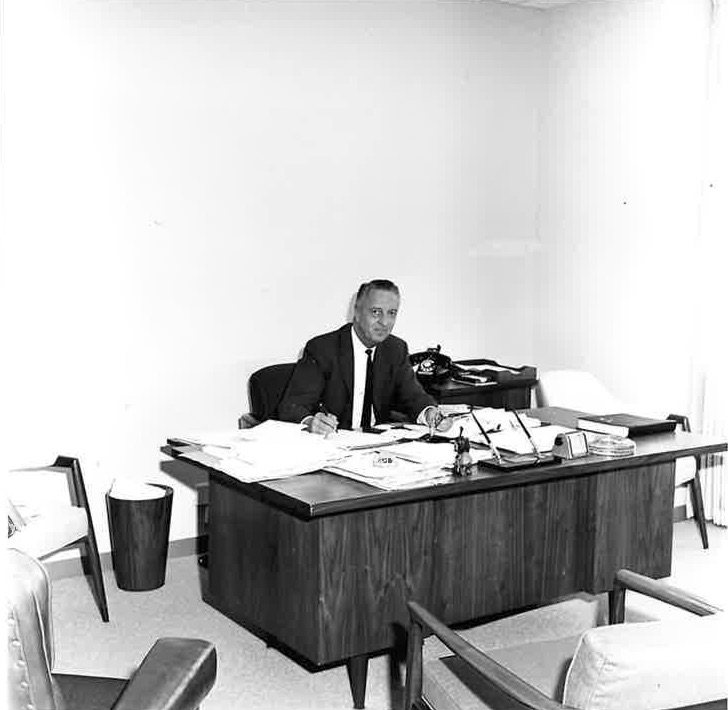 The firm was founded in 1908 in Los Angeles by Shobal P. Mulford and George W. Dryer. The practice was a general practice firm with a focus on business. They built the firm with strong ethical values and sought to become trusted family advisors. They were deliberate about having a wide-range of knowledge, they wanted to be the ones families called anytime they had a problem, trusted and knowledgable. The roots they laid then, is the foundation we continue to build on now.

Mr. Dryer was very active in civic and philanthropic endeavors, founding the Stanford Law Society of Southern California and serving as its first President. In 1919, he and noted orthopedic surgeon, Charles Leroy Lowman, founded Orthopedic Hospital and its financial support entity, the Los Angeles Orthopedic Foundation. Mr. Dryer managed the business and financial details of the two organizations, becoming their first president and serving as such until 1946. He also served as Chairman of their Boards from 1940 until his passing in 1959.

Otis H. Castle joined Mr. Dryer under the firm name Dryer & Castle, and remained active with the firm until the early 1940s, and then served as Of Counsel until 1959. He was born in Elk River, Minnesota, but soon came to California, where he attended Pasadena High School. He received his A.B. and J.D. degrees from Stanford University and was admitted to the California Bar in 1916.

In 1929, Philip H. Richards became a partner, and the firm’s name changed to Dryer, Castle & Richards. Mr. Richards graduated from Stanford Law School in 1921 and was admitted to the California Bar. He remained with the firm until 1947, at which time he was appointed to the Los Angeles Superior Court by then-governor Earl Warren.

The firm had changed its name to Dryer, Richards & Page in 1940; upon Mr. Richards’ ascendancy to the bench in 1948, the firm became Dryer, Stephens & Lagerlof.

Albert Lee Stephens, Jr. was the son of the distinguished Ninth Circuit Judge Albert Lee Stephens, and a brother of California Appellate Judge Clarke E. Stephens. He was born in Los Angeles in 1913, received his undergraduate and law school degrees from the University of Southern California, and was admitted to the California Bar in 1938. In 1961, he was appointed a Federal District Judge in the Central District of California. He served as Chief Judge in that District from 1970 to 1979, when he assumed the status of Senior Judge, a position he held until his death in 2001.

He earned his A.B. degree from the University of Minnesota and spent one year at its law school before coming to California where he completed his legal degree at the University of Southern California. He was admitted to the California Bar in 1939 and was in private practice for a short period before serving in World War II with great distinction as a lieutenant in the Navy. Mr. Lagerlof was awarded the Navy’s Silver Star, the Bronze Cross of the Netherlands, and the Purple Heart for injuries received when the Dutch merchant ship where he was in charge of the armed guard was sunk by enemy forces near Malta in the Mediterranean Sea.

During the time after World War II, many attorneys at the firm were representing land developers who were developing sub divisions. Where they were building homes, they needed access to water, so our firm began forming water companies and representing water districts. This became a unique niche that our firm began to serve, and one that we did well.

Mr. Lagerlof’s successful representation of the vital interests of the Palo Verde Irrigation District in the historic Arizona v. California litigation over rights to the waters of the Colorado River established the firm’s first solid foothold in the fields of water rights and special water district law, which many firm members practice today. Throughout his long involvement with the Association of California Water Agencies (ACWA), serving as chair of its County Water Districts section and, for many years, as a board member, he successfully promoted and directed the firm’s growing reputation as specialists in establishing and protecting water rights and serving as general counsel to water districts and municipalities. The firm formed numerous water districts over the last 50 years, and continues to serve those interests.

In 1950, the firm name became Dryer, Burris & Lagerlof. Joseph J. Burris was born in Aberdeen, South Dakota, in 1913. He received his A.B. degree from Stanford University, graduated from its law school in 1940, and was admitted to the California Bar in 1942. He spent more than two years in the Navy in World War II, serving as a Lieutenant Commander. After the war, he returned to Los Angles, where he practiced law for a year before joining the firm in 1947 as a trial attorney. For many years, until his passing in 1980, Mr. Burris served as a director of Stauffer Chemical Company, a major client of the firm, and as personal legal advisor to company vice president John Staffer.

In 1959, after the passing of two senior partners, the firm name was changed to Burris & Lagerlof. Mr. Burris and Mr. Lagerlof stayed the firm’s course, assisted by the invaluable contributions of partners H. Melvin Swift and H. Jess Senecal, who joined the firm in 1959. Mr. Senecal’s name was added to the firm in 1973, and he served as its managing partner from 1976 to 2012. He remained a vital force in the firm and its leading ambassador until his passing in June, 2012.

The firm moved to Pasadena in December, 1990, and planted roots in the vibrant community, changing its name in 1993 to Lagerlof, Senecal, Drescher & Swift, LLP. Mr. Lagerlof retired in 1996 after almost 50 years with the firm, and its name changed that year to Lagerlof, Senecal. Bradley, Gosney & Kruse, LLP in 2006.

In 2020 Lagerlof, Senecal, Gosney & Kruse, LLP merged in a strategic partnership with Primuth, Driskell & Terzian, LLP and Phelps Law Group, APC. The combination of the three firms created Lagerlof, LLP, the largest firm in Pasadena. The merge came from the aspiration to preserve the solid history and strong foundation that the firm had built over the past 100 years, and the desire to remain fresh and adapt to ever changing client needs.

In 2022 Lagerlof, LLP merged with another highly recognized and experienced Pasadena law firm, Anglin Flewelling & Rasmussen LLP. Operating under the name Lagerlof, LLP, the firms came together based on their shared vision of client service and commitment to their core values. Together they combined their skills and expertise to enhance their ability to create a greater client experience. Following this merge Lagerlof, LLP became a law firm with 47 attorneys with nearly one thousand years of combined attorney experience.

With a history dating back over 100 years, we take great pride in where our firm began. Throughout the merges our firm has gone through, the core value has stayed the same, strive to be a trusted long-term advisor to multiple generations of families, not just an attorney. The concept of team has also remained a strong pillar in the firm’s structure, as we continue to provide as many resources as necessary for matters that need it and work together in each client’s best interest.

Through the years, many of our partners have devoted their entire professional career to our firm. In fact, a key to our success lies in the fact that there has always been at least one active partner with significant longevity to ensure consistency and stability over the years. As we continue to move forward our firm is committed to adapting new technologies and resources to create a versatile experience that meets the need of every client.

Lagerlof, LLP is a firm grounded in tradition and focused on the future.

Mulford & Dryer firm was founded in Los Angeles in the Van Nuys Building.

The firm moved to the Title Insurance Building.

Firm moves to the Rowan Building.

Richards was appointed to the Municipal Court Bench.

After the passing of two senior partners, the firm name was changed to Burris & Lagerlof.

Stanley C. Lagerlof retired from the firm after 50 years. The firm keeps his name.

The firm merges with Primuth, Driskell & Terzian, LLP and the Phelps Group creating Lagerlof, LLP, the largest firm in Pasadena.